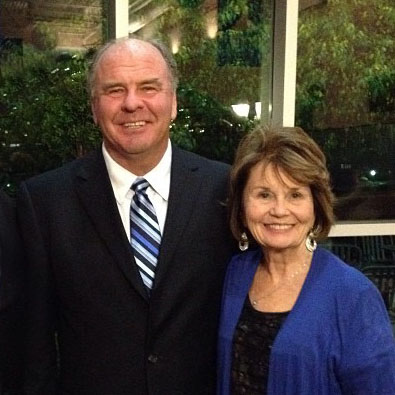 George Morrison is Senior Pastor Emeritus of Faith Bible chapel, a nondenominational church in Arvada Colorado. He served as senior pastor for over 33 years. Faith Bible Chapel is a vibrant church community that involves Faith Christian Academy, a K through 12 school with more than 1000 students, a preschool and a daycare center.

Together with his wife, Cheryl, they are leaders in the Denver metro area in supporting the Jewish community and the nation of Israel with a message of unconditional love. For 40 years their church hosted an annual Israel Awareness Day, an educational and inspirational experience designed to bring community awareness to Israel related issues. For more than three decades, Cheryl led a performing group, the International Singers and Dancers, on tours to Israel performing on military bases and in Israeli communities with a message of Christian unconditional love.

Pastor George and Cheryl serve on the executive board of Christians United for Israel, a pro-Israel organization with membership of over 4 million.

Pastor Morrison was raised in Pennsylvania. After graduating from high school in 1965, he attended Thaddeus Stevens Technical College. In 1968, he joined the United States Marine Corps and was sent to Vietnam in 1969. While there he was stationed in Quang-Tri where he served as a crew chief for the OV-10A Bronco aircraft and a gunner on a UHIE helicopter, earning his combat air wings.

In 1971, while still serving in the Marines, Pastor Morrison had a dramatic conversion to faith in the Lord Jesus Christ. This change gave him a new direction and he became actively involved in pursuing God’s will for his life.

After being honorably discharged in 1972, he moved to Colorado where he met and married his wife, Cheryl. Together Pastor George and Cheryl attended and graduated from Faith Bible Institute of Biblical Studies, where then they both became educators at the Bible college. Early in their ministry, they served as house parents for a discipleship training home for young adults.

God has used Pastor George to minister and mentor pastors and church leaders in his community and all over the world. He has spoken at numerous leadership conferences, including several Promise Keeper events. He also has written a book, If It’s Not Broken, Break It!

During the 100th anniversary celebration of the establishment of the city of Arvada, Colorado, Pastor Morrison was named one of Arvada’s 100 most influential people.

Cheryl Morrison was born and raised in Wyoming and after graduating from high school attended the University of Northern Colorado, where she excepted Jesus Christ as her Lord and Savior, beginning her lifelong journey of passionately following Him. After receiving her bachelor’s degree in education, she started her teaching career at Jefferson high school in Lakewood Colorado. Later Cheryl received a Master’s degree from Boston College.

Cheryl has a passion to teach biblical truth and to educate Christians to love and stand with the nation of Israel and the Jewish people. She led the Israel Outreach and Women’s Ministry at Faith Bible Chapel for over 30 years and has led more than 50 tours to Israel. Pastor George and Cheryl were honored by the Jewish National Fund Rocky Mountain Region with the National Community Service Award.

The Morrisons have been married for 45 years. They have three children, eight grandchildren and four great-grandchildren.